If you have ever visited the OTR Performance web site and watched the video on replacing the turbo boost/temperature sensor you are aware of their statements that if you have over 300K on your engine you should replace the sensor as both mileage and performance are downgraded by the old sensor.  They sell the sensor for $150 but are currently out of stock.

The replacement requires removing several pieces on the left of the engine to access the socket for the plug on the end of the wiring harness (watch video).  I decided NOT to pull the parts off and rather splice the exterior wiring from the old harness to the new harness.  I learned to solder and splice in the womb and have been doing it successfully for all my life.  For this project I staggered the splices on the four wires, made a Western Union splice, soldered the connection and covered with heat shrink tubing.  The secret to a good splice is proper soldering.  Make sure you have enough heat to produce a shinny silver joint when the solder cools.  A dull gray color indicates a "cold solder joint" that will introduce resistance and fail.

The photos below show how I replaced my sensor externally by making splices in the four wires.  BTW - have yet to make a trip to see if there is a difference or improvement but looking at the old sensor I feel like something good will come of the project. 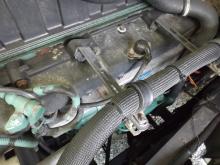 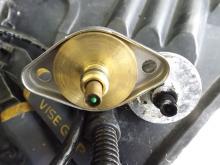 Note the condition of the old sensor (pretty ugly and covered with carbon not to mention a deformed tip!) 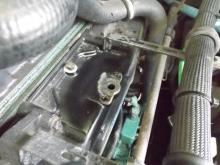 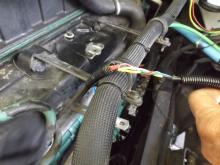 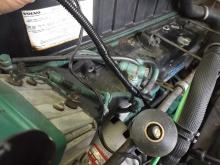 Wire loom back in place covering the spliced/soldered/heat shrink joints. 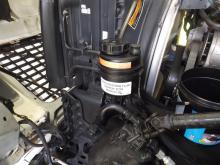 You will have your butt on top of the power steering unit during most of the job.

It gets uncomfortable very quickly.

Your butt will thank you! 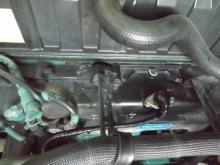 When using electrical tape in the engine compartment use a good quality tape like 3M #33.  Cheap off-brand tapes are prone to having the adhesive melt and the tape comes loose.  Also put a zip tie around the open end of your tape when you finish wrapping to prevent the end from lifting.

Besides the tape (good advice, we only used the cheap for wire pulling and such, never for the install, 88 is also good, 8.5 mils vs 33's 7 mil thickness)

Another good tip (in addition to the soldering) put the heat shrink on first. I know - duh - but I've done it many, many times and the end result is always the same (kicking myself around the yard). And as a former certified HV splicer, back in the wiped lead and cambric days, such things are not pretty.

Question: Only thing I'd be concerned with is that if this is a normal .5V - 4.5V sensor, your splice may have changed the impedance giving offset data to the ECM. Perhaps someone with a bit more of an electronics background will confirm or dispel that theory.

You are right to question altering a sensor cable. But, since inductance and capacitance are not critical factors in altering the DC signal quality on this particular cable, impedance is not a factor to be concerned with. I would not advise doing this with a shielded cable. Now, if a splice were made with wire nuts or butt connectors or an attempt to solder the wires resulted in a cold solder joint one could critically alter the signal value. Eventual corrosion in the spliced joint will result in unwanted resistance that will change the value of the signals. It is best to make a strong mechanical joint like the Western Union Splice and then solder. Often "quick splices" with butt connectors work OK initially but rapidly deteriorate - especially in hot and wet environments. I have encountered insulation literally burned off of wires with currents as low as 5 amps as a result of heat generated by the resistance introduced with butt connectors. It is a snowball effect as a small resistance introduces just enough heat to cause dissimilar contraction/expansion of the two metals which results in more resistance from oxidation/corrosion deposits and then it is all downhill - even on low level current lines like this sensor.

BTW - self fusing silicone tape is a good fall back when one forgets to put the heat shrink tubing on before finalizing a spliced connection. A mistake often made with heat shrink tubing is to use a match or lighter to heat the tubing. Such a method results in inconsistent shrink and often burning. A heat gun is a better choice.

I've put a little over 700 miles on the Volvo since replacing the boost/temperature sensor. On my truck, I can feel a noticeable improvement in engine responsiveness and overall performance.

Not sure about fuel mileage due to the differing terrain we have covered (10% grades, flats, hills) but it is looking like I may have picked up anywhere from .5 to .8 mpg. Either way, I would be happy.

My old sensor was possibly the one that came in it 796,000 miles ago. It was time for a new one. It is looking like it was a worthwhile expense for my engine. Please don't think just because I am seeing improvements others will experience the same. Your results may differ. OTR Performance advertisements say replacement after 250K is needed.