Big5er (Phil) had a failure of his alternator on his Volvo VNL780.  This was his replacement steps. 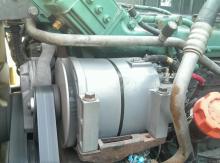 Here is a picture of my nice pretty new alternator. The old one was a model 34SI, which has been superseded by the 35SI.  The 35SI, while still in production, has also been superseded by the 36SI.  Now each of the new models has a greater amperage output, that seems to be accompanied by a corresponding larger dollar output from my wallet.

I'm sure Bill B has some sort of formula or equation to explain how this phenomenon occurs.  It is probably something like cost=sum of (amps x $$)(core charge+confused buyer).  I sure the math wizards or the electrical gurus will correct me, but I digress.....  I settled for the just slightly superseded 140 amp 35SI.  I found prices from $450 new down to $240 reman and everything in between.  My buddies at the Volvo dealer referred me to the lowest price I found.

Now, see those nice pretty (long) bolts in the picture above?  Well there appear to be two more on the other side, under that lovely green water intake.

Well, if you take the tensioner off the front (two easy to reach bolts) you can get to the front bolt with a wrench (socket and ratchet won't fit).

Closer examination shows that the rear one is a nut.  The bolt comes in from the bottom.

Let me back track a bit here. The two bolts you see in the picture and the front on that is behind the alternator are 14mm.  After reaching over, under, behind and between everything we found the head of the 4th bolt.  To do anything other than feel it, the bracket holding the oil filler needs to come off...  Two more bolts that are 14mm with 15mm nuts. (See next picture 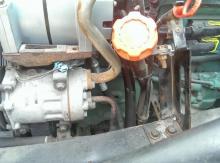 The oil filler, dipstick and all the wires going to the alternator and tied to this bracket so we unbolted it at the frame.

That now gives you enough room to really FEEL the head of this bolt well.  It is sandwiched between a metal power steering pump inlet and the the alternator.  It also isn't 14mm.  It is a 17mm.  Now,that the oil filler is gone you can actually get a ratchet wrench ON the bolt, but you can not turn it, not enough room. 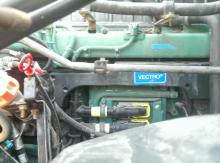 See the black cover with the "Vectro" label?  It is a plastic wiring harness and cover.  And it is blocking all the room you have to turn the wrench.  It is held on by about 8 torx bolts.  You need a long T-30 to get to them.  Don't think you will get lucky and reach them with a T-30 on a socket.  OH NO!  You need a long plain old handheld screwdriver type Torx.

The good news is that they don't fall out.  They have retainers on them so you won't lose them.

Now here is the kick in the butt.  That upside down 17mm bolt in the back, as we have discovered already is different from the others.  You can take it all the way out, like I did OR you can simply loosen it.  It doesn't go through a hole (damn it!). The built on washer just grabs the edge of the bracket and clamps down on it.  So, if you loosen it (not what I did), rotate the alternator a bit and it comes right out the front.

When you go to put it back in, thread that bolt in a little, slide the alternator in and rotate the other way.  I put in the other back bolt too since I didn't think there was clearance to insert it once the alternator was in place.  Once the three 14mm bolts were snugged up, the 17mm in the back was easy.  Grab the ratchet wrench and once you get it on the bolt that you still can't see, click twice and push, click twice and push. It was slow going but it is done. 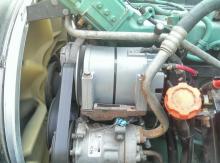 There it is, all done. Ain't it pretty?

Oh, and it's not quite done.  See that plug under the alternator bracket?  The one on top of the A/C compressor?  Well if you forget to plug it back in, the A/C will blow warm air only.  Don't ask me how I know, just take my word for it.