This triggered by a question from alan0043:

"I want to adjust my headlights, fog lights, and driving lights. I want to know what is the best distance that the lights should fall on from the front of the truck. What kind of grid is used to set your lights on ? I also need to know the right to left numbers for setting the lights. I do not want to blind any on coming driver. In short, what are the best measurements to use ? I can use my garage doors to act as the grid for the numbers needed. The fog lights are new to the truck. The driving lights where removed for some maintenance."

The response came from Nuke-E (David):

"Let's start with the LED fog lights--those are the easiest.  The cutoff at the upper edge of the beam should be at or just below the height of the center of the light.  In other words, if the light is 18" off the ground, at a reasonable distance away (e.g. 25 feet), that line should be no higher than 18".

The driving lights (assuming they're only on with the high beams) should be aimed straight ahead--there's not going to be a clear reference point in the beam pattern, so you're just trying to get the brightest part of the beam dead ahead.

The stock headlights are the hardest to do.  They're really meant to be aimed with an aiming tool that uses the three raised nubs on the light housing, instead of being aimed with a visual reference like most newer lights.  Left-to-right (the lower inboard adjusting screw), just try to get the brightest part of the beam straight ahead.  Then my best suggestion is to park the truck in a large open area and adjust the lights so that you illuminate as much pavement as possible with the low beams.  That should get you reasonably close to proper aim."

This image was added by Darryl&Rita: 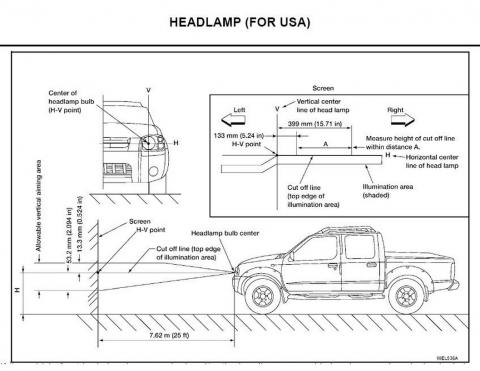 "That's a good chart for explaining things, for sure.  Just know that it's only for VOR (visual optical right) headlamps--the first-gen trucks are mechanical aim, and the second-gen trucks are VOL.  If you have a kit from me, the lab that tested the projectors confirmed that the notch height is such that either VOL or VOR aiming procedures result in the exact same position.  VOR is easier in my mind, since I don't have to remember any numbers or do any math--right side of the line goes at the same height as the dimple in the headlight lens.

I take issue a little bit with allowing aim above the height of the headlights, especially for something like the Frontier in the image--when you've got a vehicle that's likely to carry a load in the bed or pull a trailer, that will result in a very bothersome aim (and leave the pavement in front of the driver largely in the dark).  It's only made worse when those same pickup truck drivers start lifting the trucks, putting the lights outside of the acceptable height range.  For the big trucks with air levelling, it's a lot less of an issue though--just make sure the suspension is aired up while you're adjusting."