Nuke-E wanted to replace the mirrors for his Gen II Volvo.  He wound up replacing the style of his mirrors.

I thought I'd post this info just in case someone else has a similar problem.  I have a Showhauler motorhome on a 2004 Volvo VNL truck.  Since I bought it, the driver's mirror mechanism had enough slop that large bumps would cause it to rachet down.  Not a terribly big deal, but on rough roads I was frequently fiddling with the controls to move it back into position.  Also, the passenger side mirror arm had been broken and held in place with wire ties.  So I needed two new mirrors--but didn't want to pay the ~$850 each that Volvo wanted.  I thought the mirrors on the newer trucks were a better design, with metal arms (instead of plastic), and the mirror glass is bigger.

I couldn't get an answer from Volvo about interchanging the mirrors, but it looked like the doors were the same.  I figured I could handle the wiring if different, and bought a pair of used power and heated mirrors from Vander Haags.  What follows is a short description of what's involved in swapping them out.  It probably took about an hour total to do this.  When I get a chance, I'll confirm bit sizes.

Here's what I did: 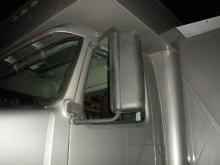 The biggest surprise since installing the new mirror is how much better you can see between the mirror and A-pillar--the lower arm's shape takes it largely out of your field of view out the left window.

For purely entertainment value, here's a video of one of the mirror replacement maneuvers (without a helper or a ladder):

This one took quite a bit longer because of the rigged repair someone had previously attempted, but should give you a feel for the process.  This was my first attempt at a time lapse video, and it ended when the wind knocked over the tripod.

Additional Comment:
Question: Do you know how to get the mirror case apart to run wires inside down through the doors?