On a Volvo, the is the wiring running along the right frame member.

On a Volvo, this is the wiring running along the left frame member.

Now an RV trailer is wired as Stop/Turn and yet the most apparent place to wire the trailer cable plug is from the truck trailer receptacle.  That is the issue.

If you prefer, you can make your own DIY Tail Light Converter by utilizing either three or four 40 Amp Bosch style relays as displayed in the two schematics below that were designed and drawn by fppf.

If you plan to pick up 12 Volt power from the center auxiliary pin in the OEM trailer electrical socket located behind the cab to feed power to a DIY powered TL converter or the Jackalopee, Make Sure there is a 40 Amp fuse in - location B2 - which is marked "Trailer AUX" in the secondary fuse panel that is located directly behind a small panel under the drink holder on the dash.

For more details about Hoppy issues with a Generation II Volvo check the following discussion To Hoppy or not to Hoppy?. 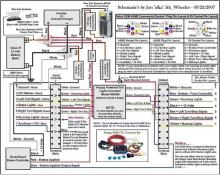 This schematic details how to wire a Hoppy 46365 including how to properly wire it so the OEM ICC Marker Light Switch on your dash will blink your 5th-Wheel's running lights.

As mentioned above you cannot use a retail version tail light converter on 2003/2004? and up Volvos.

The schematic also details pretty much everything you need to know about the electrical basics or setting your new truck up as an RV/Toter and this also includes wiring additions/upgrades that you want to make on the newer Volvo's. 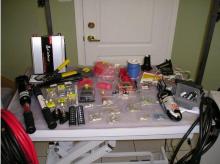 Billr's (Bill) photos of the clean looking electrical upgrades that he did in his VNL770 that also includes photos of many of the items that he used for his electrical conversions. 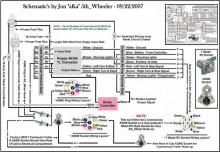 This schematic shows how to wire your electrical compartment for dual function hook-ups. 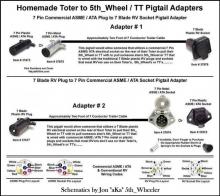 These are the homemade pigtails that are required for the dual function electrical hook-ups.

To Hoopy or not to Hoppy
Trouble Shooting Trailer Wiring Problems